This presence must, at times, have been overwhelming.  Today, we enjoy the fruits of industrial rigor brought to bear upon the world, and everywhere we look, we see evidence that our minds have reached beyond our earthly grasp into a realm of engineered and machined perfection, of flat expanses of drywall and laminated flooring, of appliances, fittings, even ceramics manufactured to tolerances unheard of—and perhaps unnecessary—centuries ago.  But in that previous age, when our destiny as conquerors of domestic space was not so assured, how terrifying it must have been to hear the creaks and groans of nature’s assault on the home, to see the roots creeping in through the floorboards and the tidal wave of spring rains slapping at the windows—how terrifying to sense life emerging at every turn, to always see green things teeming out of the soil and insects swarming in the thick air.

It must have felt like constant violation, like a betrayal of some ancient treaty that one remembered vaguely but felt powerless to enforce, as if our agreement to live unmolested near the trees and fields had been breached, our Eden gone to seed.

The simple joy of quickly executed carving, or of patterns laid down in red and yellow paint, may certainly have been reason enough to decorate wood found inside the home.  And that is surely part of the reason New Englanders did so.  But perhaps there was another cause, never stated, but acutely felt.

Immersed so fully in the world of earth and trees, of hours and seasons—a world both sublime and dangerous—people must have needed some symbol to assure them that they would not be swallowed by the immovable forces closing in on them from every corner, that they might yet hope for some escape from the dark woods outside, from the onslaught of heat and moisture and cold and dryness and the thousand-faced incarnations of Life aching to break through the void of nothingness, into this, the world of the Living.  Those souls, so put upon by the life around them, must have needed a symbol of their human life, of their own power of being, imposed upon those other lives, those other beings.

Consider this scene:  a man owned a wooden stool to sit on after spending the sunlight hours turning soil or felling trees.  Perhaps one day, the soil would be too heavy and would not turn, or the tree would prove too great to buck in a single afternoon.  And in the restful, dark hours, perhaps this man, so exhausted in his battle with a world far more substantial than himself, could not simply slump down onto the oak seat by the flames, in fear that in his weakened state, the blind, unrelenting force of the wood would swallow him, that he might fall into the oblivion of that hypnotic, inhuman face.  No, in this, his stool by the fire, he needed some mark, not of death, but of life, a mark wrought not by nature, but by the hand.  A mark to remind him that he was civilized and above all this.

And so he carved, he painted, he covered every visible surface with motif and pattern, with color and flair.  With leaves and scrolls, with pigments ground and mixed with oil, he hid the terrible, monotonous strength that threatened him at every turn.

Of course, this all changed.  We moved out of the woods, or more properly, we moved the woods themselves, and we drug ourselves away from the threat of wild things.  Today, a wooden object made by hand is a sort of oasis in our desert homes, a humble stranger all the more charming because he reminds us of someone we once knew.

Through enlightenment of mind and refinement of manners, we overcame the old death—that is, the ability of nature to take our lives at a whim. But  today, perhaps what we ought to fear is no longer our lack of power in the face of nature, but a power so great that it exceeds the mortal strength of a single man or woman, and so falls short in reminding us of our limits, of our very mortality.

One thing has not changed.  Civilization still needs a reckoning to remind itself why it is worth carrying on, to continue struggling against the inevitable forces that cut us all down.   Three centuries ago, the mark of that reckoning was a carved or painted flourish on a bit of riven wood—a symbol of human beauty and ingenuity, of hope against impossible odds.  The new mark of civilization might simply be a finely made table or a keepsake box, made of real, solid wood by real, working hands.  We need that mark now more than ever, to remind us of our wild past, and of the death that will inevitably come. 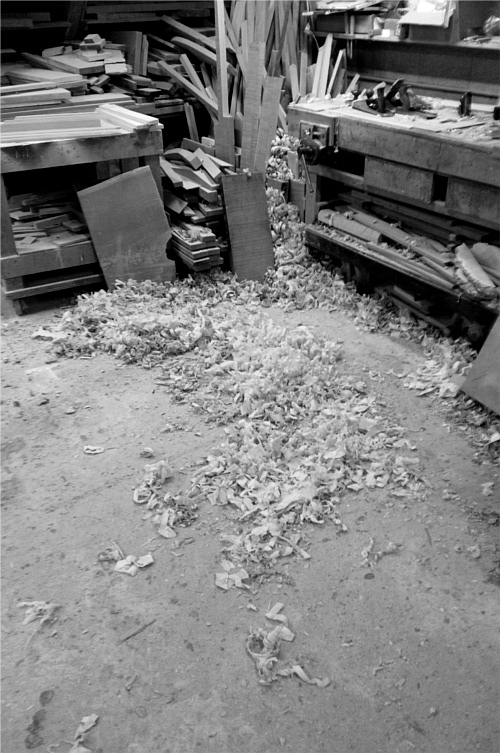 “At this moment a flower blossoms, a leaf falls–it is a manifestation of sustained exertion…Everything is exertion.  To attempt to avoid exertion is an impossible evasion, for the attempt itself is exertion.”

When last we saw our beautiful Alaskan Yellow Cedar, it had been ripped and cut into lengths 5/8″ wide by 2″ thick by two feet long.  These lengths contain five kumiko strips, if everything goes according to plan–which is to divide the two inch face into five parts, each about 1/4″ wide, and saw out five slim lengths. 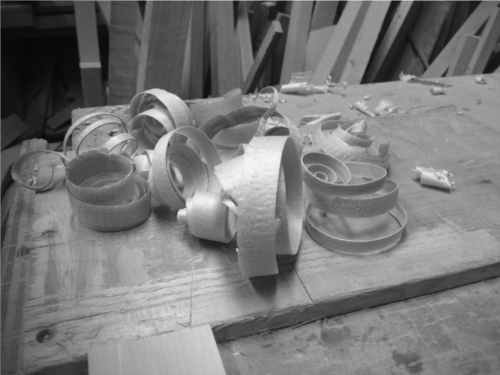 Shavings from the initial flattening of the rough-sawn strips